A ten-year odyssey around the world, and what did it all mean? An open exploration of “the sixties” and the legacies of the times.

Join TNS Host Steve Heilig in an interview and dialogue with long-time Bolinas denizen Ananda Brady about his new book, Ten Years on the Hippie Trail—an engrossing retelling of his worldwide wandering in the 1960s and 1970s. He will talk of those travels, and explore the deeper questions of why “the Sixties” happened, what has lasted and what was lost, why, and what it all means. 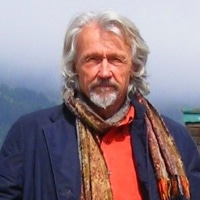 Craig G. Brady was born in a Naval hospital in Oceanside, California, on August 14, 1945 (“VJ Day”—the very day of the wildest American celebration ever, the day that marked the end of WWII). His family moved back to Kansas, where he grew up. In 1966 he moved to Southern California, beginning a four-year process of change that was to alter his beliefs and assumptions on just about everything.

To satisfy his deep need for ‘knowing’ he set out on a general quest coupled with a resolve to get to India, no matter how long it took. He tossed himself onto the open road without any plan and only a couple hundred bucks in his pocket, and crossed the border into Mexico, his first time out of the country. He wandered in lonely misery and doubt for a few long weeks, but the day his entire reserve of funds was stolen was the day his adventure kicked into gear, never again to wain.