Join Host Michael Lerner in conversation with director and producer David Grubin. His recent film, “Free Renty: Lanier v. Harvard,” tells the story of an African-American woman’s struggle to reclaim her heritage. The film chronicles a historic lawsuit against Harvard University and raises critical questions about reparations. Watch a clip from the film here. 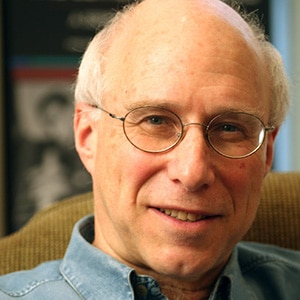 David is a director, writer, producer, and cinematographer whose films range across history, art, poetry, and science, winning every major award in his field, including two Alfred I. Dupont awards, three George Foster Peabody prizes, five Writer’s Guild prizes, and ten Emmys. His films include The Trials of Robert Oppenheimer, The Buddha, Abraham and Mary Lincoln: A House Divided; LBJ; Truman; TR: The Story of Theodore Roosevelt; FDR, The Secret Life of the Brain, The Jewish Americans, Kofi Annan, Center of the Storm, Tesla, The Mysterious Human Heart, Language Matters with Bob Holman, Degenerate Art, In the Beginning Was Desire, and Healing and the Mind with Bill Moyers – Wounded Healers.

Michael is the president and co-founder of Commonweal. His principal work at Commonweal is with the Cancer Help Program, Healing Circles, Beyond Conventional Cancer Therapies, the Collaborative on Health and the Environment, and The New School at Commonweal. He was the recipient of a MacArthur Prize Fellowship for contributions to public health in 1983 and is author of Choices in Healing: Integrating the Best of Conventional and Complementary Therapies (MIT Press).