Join TNS Host Michael Lerner in conversation with Lázaro Pedroso, 79, a percussionist and singer from Havana, Cuba. For 50 years, he has been a Santero (priest in the Afro-Cuban Santeria religion). Santeria involves polyrhythms, song, and dance.  There are herbal elements, musical elements, magical elements, and prayers, carried over by West African slaves.

Lázaro is a professor at two major universities in Havana teaching folkloric tradition, and a sought- after priest who sings ceremonies. He has published Lazo (a translation of 72 songs sung to the spirits of deceased ancestors in the tradition of the Afro-Cuban Santeria religion), Olodumare (an essential encyclopedia of the tradition of the Afro-Cuban Santeria religion), and Patakia (a dictionary of ancient Yoruba words, translated to Spanish and then to English. 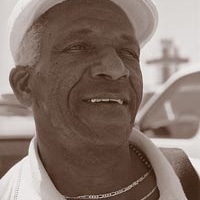 Lázaro is a scholar of the song traditions of Yoruba-Lukumí. The Lukumi community in Cuba originated with kidnapped Africans from Oyo, Egbado, and other Yoruba areas in Nigeria and Benin, Africa. Lázaro is a respected batá player, and an elder of the Yoruba-Lukumí tradition, with a half century of experience as a santero (a mediator between people and Olodumare, the Creator) in Havana. Lázaro has been employed as professor of folkloric percussion and professor of the Escuela National de Arte, Instituto Superior de Arte, and senior adviser of the Centro Superior de la Enseñanza Artistica in Havana.  He has participated as a musician in festivals of music and dance throughout Cuba. He has also traveled internationally as a leading participant in a folkloric performance tour of France in 1994, a teaching and performance excursion to Mexico in the year 1992, and in 2001 to the United States to give performances, workshops, and classes.