Join Michael Lerner in this conversation about Richard’s studies and thoughts about Ralph Waldo Emerson—philosopher, essayist, poet, lecturer, and journal-keeper. 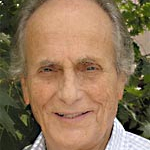 Richard is an essayist, psychotherapist, medical educator, and former book publisher. The six books he has written include The Tao of Emerson and A Year with Emerson, which won the Umhoefer Prize for achievement in the humanities, awarded by the Arts and Humanities Foundation. He has read Emerson daily for over 50 years. Richard’s website has Emerson’s complete journals and the bulk of his other writings on-line.

Grossman considers Emerson a precursor of contemporary humanistic and transpersonal psychology. In 1970 Michael Murphy of Esalen Institute told Grossman about Roberto Assagioli, the Italian psychologist and founder of the transpersonal psychology called Psychosynthesis. Grossman published Assagioli’s books Psychosynthesis and The Act of Will in America. Grossman also discovered fundamental resonances between Emerson and Lao Tse, the mysterious Chinese Taoist and author of the Tao Te Ching.