Rick’s passions center on the role of play, art, and creativity in personal and social transformation. His wife, Peggy Taylor, and he have self proclaimed “black belts in throwing a better party….” Rick’s two greatest mentors were Buckminster Fuller and Marshall McLuhan, both of whom deepened his interest in the relationship between culture and technology. 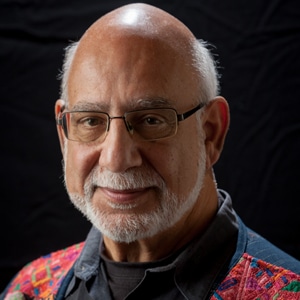 Rick’s background is in psychiatry, psychedelic medicine, community development, and social entrepreneuring. He practices life coaching, mainly with leaders of non-profit organizations, and is the director of the StoryDome Project — Expanding Worldviews and Transforming the Way We Live and Learn Through the Power of Visual Storytelling. He is co-author of the bestselling Chop Wood, Carry Water: A Guide to Finding Spiritual Fulfillment in Everyday Life.

He co-founded Interface (Boston’s largest holistic education center), the American Holistic Medical Association, Physicians for Social Responsibility, and Hollyhock, where he has been convening an annual Hollyhock Summer Gathering since 1986.