Join TNS Host Steve Heilig for a conversation with long-time Bolinas resident Sadja Greenwood, MD, about her life of action and activism in women’s health, teaching, nutrition, and more. They’ll talk about her most recent book, published in 2013, called Changing the Rules: “This novel is set in the 1950s: romance, bohemian life (before the Beatniks), medical school, sex, illegal abortion (safe or deadly), and a young woman’s journey to find her calling. It’s a cautionary tale for today.” Hear the podcast from Sadja’s last visit to The New School: 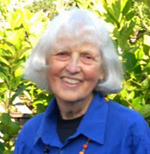 Sadja Greenwood received an MD from Case Western Reserve University and an MPH from the University of California, Berkeley. She was an assistant clinical professor in the Department of Obstetrics, Gynecology, and Reproductive Sciences at the University of California Medical School in San Francisco. She worked at Planned Parenthood in San Francisco where she started one of the first Teen Clinics in the United States in 1968, in response to the “summer of love.” She started an abortion clinic at San Francisco Planned Parenthood immediately after the Supreme Court’s 1973 decision in Roe v. Wade. She also worked for the International Planned Parenthood Federation in Singapore and in family planning in Latin America, Bangladesh, and Africa. She made a teaching film, Aspiration Abortion Without Cervical Dilation, in 1973 with her mentor and colleague, Alan Margolis, MD. The film was widely used to teach medical techniques for safe abortion. She is the author of Menopause, Naturally (Volcano Press, 1996), which became a popular book for women seeking alternatives to hormone therapy. She published a novel, Changing the Rules, in 2013, which is available at bookstores and at Amazon.com. She is a longtime Bolinas resident and plays in the renowned local celtic group, Midnight on the Water.