Join Shodo Harada Roshi for this meditation, dharma talk, and another meditation. The dharma talk is translate from Japanese into English. 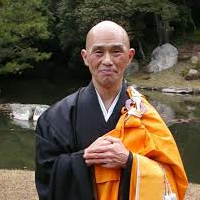 Shodo was born in 1940 in Nara, Japan. He began his Zen training in 1962 when he entered Shofuku-ji monastery in Kobe, Japan, where he trained under Yamada Mumon Roshi (1900-1988) for twenty years. He was then given dharma transmission (inka) and was subsequently made abbot of Sogenji monastery in Okayama, Japan, where he has taught since 1982.

In September 1989, Harada came to the United States to provide instruction for students and in 1995 founded One Drop Zendo (or, Tahoma One Drop Zen Monastery) on Whidbey Island in Island County, Washington, where the practice mirrors the practices found at Sogen-ji. Nearby the Tahoma One Drop Monastery, Harada has opened a hospice known as Enso House in 2001.