In this presentation, Anna Sofaer and Christopher Powell show how the Maya of Mesoamerica and the Chaco culture of New Mexico used solar and lunar building alignments and designs of sacred geometries, as well as profound knowledge of geography, to locate and develop their monumental religious architecture.

The exchange of information between these scholars has brought to the fore a larger picture of the brilliant knowledge of ancient American cultures of astronomy, latitude and geometry. They will describe how the role of this knowledge was a spiritual inspiration to their magnificent achievements in art and architecture and how the power of a large conceptual framework integrating time and space spanned the vast regions of the ancient America. 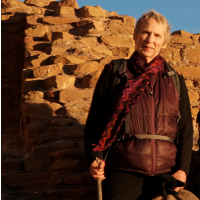 Anna Sofaer rediscoverd the now-famous “Sun Dagger” petroglyph site on a desert butte high above Chaco Culture National Historical Park in New Mexico at Summer Solstice in 1977. In 1978, she founded the non-profit Solstice Project, through which she has contributed 35 years of research into the meaning of ancient Chaco’s astronomical expressions. Sofaer and the highly qualified science team of the Solstice Project struggled to overcome resistance to their findings by an entrenched archaeological establishment. As deeper investigations provided more and more substance to her findings, Sofaer now stands tall as one of the great pioneers of American archaeoastronomy. The Solstice Project’s film The Mystery of Chaco Canyon, narrated by Robert Redford, has been broadcast across the country on PBS stations since 2000. Her nine research papers are also on the solstice project website. 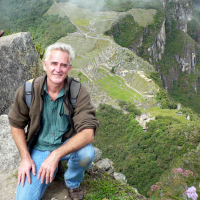 Christopher Powell is an archaeologist with more than 20 years experience conducting, supervising, and directing excavations at the Pre-Columbian ceremonial centers of Cerros in Belize, Copan in Honduras, and Palenque in Chiapas Mexico. He has also conducted anthropological investigations in Yucatan, Honduras, Southern Mexico, and the Highlands of Guatemala. Dr. Powell received his undergraduate training at the University of Arizona at Tucson, and received his doctorate at the University of Texas at Austin under the direction of the late Dr Linda Schele. His masters thesis, A New View on Maya Astronomy investigated the deep underlying mathematical structure of Maya astronomical calculations. His doctoral thesis is a fascinating exploration of the visual and religious genius of the Maya culture: The Shapes of Sacred Space: A Proposed System of Geometry Used to Layout and Design Maya Art and Architecture and Some Implications Concerning Maya Cosmology.