This presentation—followed by a conversation with The New School’s Kyra Epstein—held at the Point Reyes National Seashore’s Red Barn, focused on Guglielmo Marconi’s construction and operation of two wireless radio stations in Bolinas and Marshall between 1912 and 1919. Marconi’s ambitions and business acumen, the topic of his 2010 book, will be explained in relation to the sites near Bolinas and Marshall that could connect wirelessly with Hawaii.

In 1916, service to Hawaii opened, and, through Hawaii, to Japan. In World War I, the U.S. Navy took over operation of stations owned by American Marconi, a subsidiary of British Marconi. In 1919, after World War I, the United States government, led by the U.S. Navy, forced British Marconi to sell American Marconi to General Electric and its subsidiary, the Radio Corporation of America, thereby ending Marconi’s participation in the California stations. 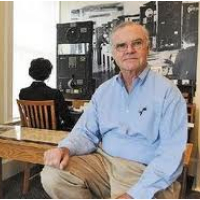 Cam is the author of Marconi: Father of Wireless, Grandfather of Radio, Great-Grandfather of the Cell Phone, The Story of the Race to Control Long-Distance Wireless. He has spent forty years in the corporate field observing, analyzing, managing, and writing about international, legal, and financial affairs, marketing and personnel concerns, development, and other critical issues. He has been engaged with start-ups, conglomerates, as well as mature companies. Trowbridge is a graduate of Phillips Exeter Academy, Yale University, and Harvard Law School. He has lived in England and the northeast coast of the United States and, like Marconi, has a deep love for the sea. To prepare for writing the in-depth biography, Trowbridge studied Marconi’s texts, historical events of the time, biographies of scientists and businessmen relevant to Marconi, and financial reports of Marconi companies.