Michael Lerner talks with David Spangler about his life and his recent book, Apprenticed to Spirit. Apprenticed is a memoir of David’s journey to understanding how we can learn to lead lives of greater blessing and to be sources of blessing and service for the world as a whole. In the book, David documents his encounter in 1965 with an extraordinary presence, which he named “John,” and which over the next quarter-century would be his colleague and mentor, assisting him in exploring the “inner worlds” of the spirit. 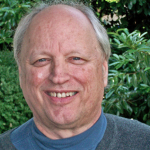 Since 1964, David has been an author and teacher of spirituality. In 1970 he visited the Findhorn Foundation community in Northern Scotland where he was invited to become its co-director and to be a teacher-in-residence. He lived and worked in the community until 1973, becoming the founder of its educational program. Along with several friends and colleagues from Findhorn, he returned to the United States in 1973, and in 1974 he joined with them to create the Lorian Association, a non-profit spiritual educational foundation. David’s other books include Emergence; The Call; Everyday Miracles; Parent as Mystic, Mystic as Parent; Blessing: The Art and the Practice; The Story Tree; Manifestation: Creating the Life You Love; and The Incarnation Card Deck.