Urban designer Teddy Cruz ‘s work dwells at the border between San Diego and Tijuana, Mexico, inspiring a practice and pedagogy that emerges out of the particularities of this bicultural territory and the integration of theoretical research and design production. Join  host Chris Desser, a fellow at the Tomales Bay Institute and co-editor of Living with the Genie: Technology and the Quest for Human Mastery, in a conversation about local architectural and urban planning solutions for global political and social problems. 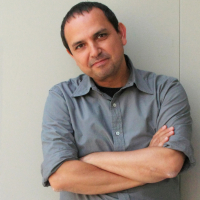 Teddy has taught and lectured in various universities in the U.S. and Latin America, and in 1994 he conceived and began the LA/LA Latin America / Los Angeles studio, an experimental summer workshop at SCI-Arc in Los Angeles. During 2000-05, he was associate professor in the school of architecture at Woodbury University in San Diego where he began Border Institute to further research the urban phenomena at the border between the United States and Mexico. He has been recently appointed associate professor in Public Culture and Urbanism in the Visual Arts Department at the University of California, San Diego. His firm, Estudio Teddy Cruz, was selected among eight other firms as one of the national “Emergent Voices” in architecture by the Urban League in New York City.