You want to be more self sufficient, but you only have a small piece of land. What can you do and where do you begin?

The reality is that you can’t be completely self-sufficient (even with a large acreage), but self-sufficiency, like perfection, is a direction. Join host Michael Lerner for a conversation with Bolinas’ Lloyd Kahn—editor-in-chief of independent California publisher Shelter Publications and author of Tiny Homes: Simple Shelter—about the tools and techniques he’s developed or settled on during 40 years of raising food and animals, foraging, cutting firewood, and other urban homesteading activities. He’ll talk about what works and doesn’t, the tools he’s found most helpful, and why he still has chickens, but no longer goats or bees.

Download the slideshow of this presentation. Please be patient, these files take a while to download!)
Part 1 (PDF 30 MB)
Part 2 (PDF 35 MB) 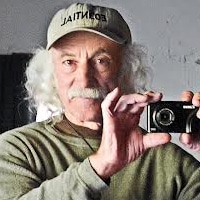 Lloyd is an author, photographer, and pioneer of the green building and green architecture movements. With a degree from Stanford University, he began work as a carpenter in the 1960s, eventually building four houses. Influenced by Buckminster Fuller, in 1968 he started building geodesic domes. Kahn next worked for Stewart Brand as Shelter editor for the Whole Earth Catalog. In 1970 Kahn published his first book, Domebook One, followed the next year with Domebook 2, which sold 165,000 copies. In 1971, he bought a half-acre lot in Bolinas, California, and built a shake-covered geodesic dome (later featured in Life magazine). After living in his dome for a year, Kahn decided domes did not work well: he stopped the printing of Domebook 2 and disassembled and sold his dome. He then went in search of other (non-dome) ways to build – across the United States, Ireland, and England, and the book Shelter (1973) was the result.

Kahn’s next book, Tiny Homes On The Move: Wheels & Water,  is set for publication in May 2014.