The Radical Faerie movement was launched in 1979 by longtime gay activist Harry Hay and three other visionaries. It was (and is) a movement among gay men that explores the culture and spirituality of The Sissy. Instead of activism that aims toward gay men’s assimilation into mainstream straight culture, the Faeries allow space for gay men to express their sexuality, their gender, and their spirit in ways that are authentic, creative, and honored. Radical Faerie sanctuaries and encampments exist around the world, and Faeries gatherings have created a recipe for self-exploration, heartfelt sharing, and vivid self-expression that have come to be used in many contexts outside of the Faerie world. 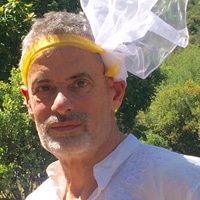 Chas Nol has been involved with the Radical Faeries, a Gay men’s spiritual and affinity group, for more than 30 years. He has played many roles in fostering queer community, including being a facilitator of Sex Magick workshops internationally, organizing West Coast Faerie Gatherings since the 1980s, and creating Faerie communities in unlikely places, including Beijing. In Chas’ view, the Faeries are not a subculture but a “superculture,” transcending national and cultural boundaries and finding commonality and richness in the gay outsider experience.

As a caregiver and close friend of gay rights pioneer, Harry Hay, he collaborated and organized many gatherings and events with Radical Faeries in Southern California. He cowrote and edited FDR, a Los Angeles-based magazine for Radical Faeries. He also manages Saratoga Springs retreat center in Lake County catering to GLBTQ and alternative groups.