Photo above: the German cemetery where Irwin’s family is buried, and that he visited in 2017. 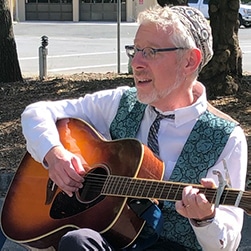 Irwin has served as spiritual leader of Congregation Ner Shalom in Sonoma County, California, since 2008, and received his rabbinic ordination through the ALEPH ordination program in 2021. He is a co-founder and steward of the Taproot Community – a deep dive into mystical learning and spiritual practice for activists, artists and community ritualists.

He was a lawyer and advocate (including being the primary author of Chicago’s first gay rights law), and was a singer in America’s Favorite Dragapella Beautyshop Quartet, the Kinsey Sicks, dubbed by NPR “the Royal Shakespeare Company of drag performance.” In his blog, Itzik’s Well, he writes about life, loss, family, hope, change, Torah, gender, sexuality and the usefulness of an outsider’s perspective.

Michael is president and co-founder of Commonweal in Bolinas, California. He co-founded Commonweal in 1976. His projects include the Commonweal Cancer Help Program, Healing Circles, Beyond Conventional Cancer Therapies, The New School at Commonweal and The Resilience Project. A Harvard graduate, he received a PhD and taught at Yale in the early 1970s before moving to Bolinas, California, in 1976. He received a MacArthur fellowship for contributions to public health in 1984.