There is no poet with more whimsically tough a mind…
She’s the best of the west.  —Robert Creely

No other poet of my gen­eration has been able to make the pleasures and particu­lars of the ‘everyday’ as luminous and essential and cen­tral.  —David Meltzer

A longtime Bolinas resident, Kyger will read from her work and be in discussion with her longtime friend and admirer, Steve Heilig of The New School. Copies of her brand new book On Time: Poems 2005-2014 (City Lights Publishers) will be available for purchase and signing. 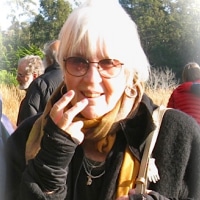 One of the major poets of the SF Renaissance, Joanne was born in 1934 in Vallejo, CA. After studying at UC Santa Barbara, she moved to San Francisco in 1957, where she became a member of the circle of poets around Jack Spicer and Robert Duncan. In 1960, she and then-husband Gary Snyder traveled in Japan and India where, along with Allen Ginsberg and Peter Orlovsky, they met the Dalai Lama. She returned to California in 1964 and published her first book, The Tapestry and the Web, in 1965. In 1969, she settled in Bolinas, where she continues to reside today.

She has published more than 30 books of poetry and prose, including Strange Big Moon, The Japan and India Journals: 1960-1964 (2000), As Ever: Selected Poems (2002), and About Now: Collected Poems (2007), which won the 2008 Josephine Miles Award from PEN Oakland. She occasionally teaches at Naropa University.