Part of the End-of-Life Conversations Series

Join Michael Lerner in conversation with Roshi about his experiences with death and dying and for an unforgettable demonstration of his calligraphy. 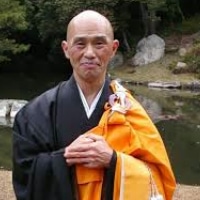 Shodo Harada Roshi is Abbot of Sogen-ji, a 300-year-old Rinzai Zen monastery in Okayama, Japan. He is also Abbot of Tahoma Monastery on Whidbey Island north of Seattle. He founded Enso House, a hospice affiliated with Tahoma, where his students attend the dying.

He is a master of Japanese calligraphy, and has conducted demonstrations at the Asian Art Museum in San Francisco and the Metropolitan Museum in New York. His translator and colleague, Priscilla Daichi Storandt, is co-abbot at Tahoma and a senior teacher in her own right. Find out more on his website.