David Bonbright has been an international grantmaker with the Ford Foundation in Africa during the end of apartheid and with the Aga Khan Development Network in pre- to post-911 Pakistan, Tajikistan, and Afghanistan. Originally from Ross, California, David is based in London with his talented South African filmmaker wife, Elaine Proctor.

Join Michael Lerner in a conversation with David about his project he calls Keystone Accountability, creating a better way for foundations, non-governmental organizations, philanthropists, and other civil society actors to evaluate the actual effectiveness of third-sector projects. 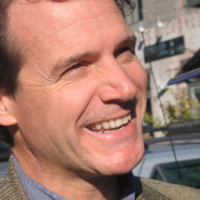 David is founder and chief executive of Keystone. Over the past three decades, as a grantmaker and manager with Aga Khan Foundation, Ford Foundation, Oak Foundation, and Ashoka, David has sought to evolve and test innovative approaches to strengthening citizen self-organization for sustainable development as an alternative to prevailing bureaucratic, top-down models of social service delivery and social value creation.

While with the Ford Foundation, he was declared persona non grata by the apartheid government in South Africa. In 1990 he returned to South Africa and entrepreneured the development of key building blocks for civil society, including the first nonprofit internet service provider, the national association of NGOs, the national association of grantmakers, and enabling reforms to the regulatory and tax framework for not-for-profit organisations that were among the first laws passed by the newly elected Mandela government.