Since China’s “reform and opening up” beginning in the late 1970s, China has had double-digit gross domestic product (GDP) growth almost every year, including close to a 50% increase in GDP since the global economic crisis began in 2007. From an impoverished rural country where more than 80% of the population engaged in near-subsistence farming, half of China’s population now live in cities.

What are the impacts of China’s urban transformation on the ground? What are China’s greatest urban planning accomplishments, failures, and challenges for the future? Join Michael Lerner for this discussion with Richard LeGates about China’s urbanization and China’s urban future. 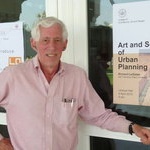 Richard is a professor emeritus of Urban Studies and Planning at San Francisco State University and an authority or urbanization and city and regional planning. Earlier in 2012 he was a visiting professor of urban planning at Tongji University in Shanghai and Renmin University in Beijing and a Fulbright scholar at the Technical Institute of Bandung, Indonesia.