Brother David Steindl-Rast is an 86-year-old Benedictine monk who many consider the successor to Thomas Merton at the intersection of Christianity and Buddhism. Together with Merton, Brother David helped launch a renewal of religious life.

In these interviews with Michael Lerner, which took place over a span of six months, Brother David talks about his life and work, the people and experiences that made him who he is, and his philosophy of living life with gratitude. Watch the video files on our Vimeo channel. 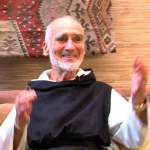 David Steindl-Rast was born July 12, 1926, in Vienna, Austria, where he studied art, anthropology, and psychology, receiving an MA from the Vienna Academy of Fine Arts and a PhD from the University of Vienna. In 1952 he followed his family who had emigrated to the United States. In 1953 he joined a newly founded Benedictine community in Elmira, NY, Mount Saviour Monastery, of which he is now a senior member.

After twelve years of monastic training and studies in philosophy and theology, Brother David was sent by his abbot to participate in Buddhist-Christian dialogue, for which he received Vatican approval in 1967. His Zen teachers were Hakkuun Yasutani Roshi, Soen Nakagawa Roshi, Shunryu Suzuki Roshi, and Eido Shimano Roshi. He co-founded the Center for Spiritual Studies in 1968 and received the 1975 Martin Buber Award for his achievements in building bridges between religious traditions. At present, Brother David serves a worldwide Network for Grateful Living, through www.gratefulness.org, an interactive website with several thousand participants daily from more than 240 countries.