Co-presented by the OMEGA Collaborative, The Millennium Alliance for Humanity and the Biosphere, The Resilience Project, and Foresight Analysis Nexus~

Kim’s Ministry for the Future has received widespread acclaim. It has become a fundamental speculative fiction text for those interested in finding hope in climate change and the global polycrisis. Join TNS Host Michael Lerner in a conversation with Kim Stanley Robinson about his book and his vision for the future. 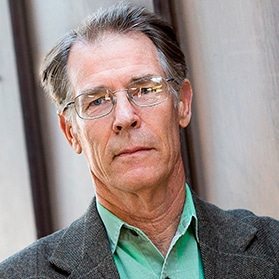 Kim is an American science fiction writer. He is the author of more than twenty books, including the international bestselling Mars trilogy, and more recently Red Moon, New York 2140, Aurora, Shaman, Green Earth, and 2312. He was sent to the Antarctic by the U.S. National Science Foundation’s Antarctic Artists and Writers’ Program in 1995 and returned in their Antarctic media program in 2016.

In 2008 he was named a “Hero of the Environment” by Time magazine. He works with the Sierra Nevada Research Institute, the Clarion Writers’ Workshop, and UC San Diego’s Arthur C. Clarke Center for Human Imagination. His work has been translated into 25 languages and won a dozen awards in five countries, including the Hugo, Nebula, Locus, and World Fantasy awards. In 2016 asteroid 72432 was named “Kimrobinson.”

Michael is the president and co-founder of Commonweal. His principal work at Commonweal is with the Cancer Help Program, Healing Circles, Beyond Conventional Cancer Therapies, the Collaborative on Health and the Environment, and The New School at Commonweal. He was the recipient of a MacArthur Prize Fellowship for contributions to public health in 1983 and is author of Choices in Healing: Integrating the Best of Conventional and Complementary Therapies (MIT Press).